AED Guidelines for Parishes and Schools

OSHA estimates that approximately 890 deaths from coronary heart disease occur outside of the hospital or emergency room every day. Most of these deaths are due to the sudden loss of heart function or sudden cardiac death. The National Athletic Trainers’ Association estimates that more than 100 young athletes die each year in sports-related incidents and that close to half of these deaths are attributed to sudden cardiac death. According to the CDC, death from sudden cardiac arrest is preventable if a bystander quickly retrieves and applies an Automated External Defibrillators (AED). 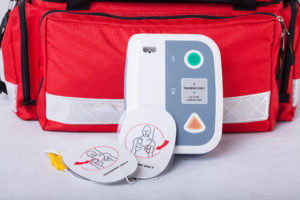 AEDs are specialized medical devices designed to recognize and treat certain potentially lethal heart rhythms in the setting of a cardiac arrest. AEDs deliver an electrical shock to persons in ventricular fibrillation or ventricular tachycardia, providing auditory and visual prompts to assist first responders in treating a cardiac arrest. OSHA notes that defibrillation is just one part of treatment that also includes calling for emergency medical assistance and cardiopulmonary resuscitation (CPR), but early defibrillation is the most critical of all the steps because it is definitive therapy for ventricular fibrillation.

Time is the most critical factor in survival:

Sudden cardiac arrest (SCA) occurs when ventricular fibrillation takes place or when the heart stops beating altogether. Without medical attention, the victim collapses, loses consciousness, becomes unresponsive, and dies. Many victims have no prior history of heart disease and are stricken without warning.

Children and adolescents can suffer from SCA, especially athletes. The American Heart Association reviewed 158 cases of death in athletes due to sudden cardiac arrest from 1985 to 1995. Sixty-eight percent of the deaths occurred in players with an average age of 17 years. Sudden death in young athletes occurs most commonly in male basketball and football players. The New England Journal of Medicine states that 90 percent of sudden death in athletes occurs during practice or competition; it is thought that intense physical activity can trigger sudden death when certain cardiovascular diseases are present. For this reason, the National Athletic Trainer’s Association recommends that high school and college athletic programs formulate a planned response to incidences of SCA which includes access to a portable AED and training.
Another cause of sudden cardiac death results from a blunt blow to the chest. The medical name for this is commotio cordis. The blow to the chest, usually with an object such as a baseball or hockey puck, can trigger ventricular fibrillation if the blow strikes at exactly the wrong time in the heart’s electrical cycle. Young athletes are especially at risk because of the pliability of their chest walls. Time is a critical factor after the onset of the event. Early defibrillation in conjunction with CPR is essential.

Training Personnel on the Use of AEDs

Today’s AEDs are designed to be used by individuals with minimal or no training. In an OSHA study of mock cardiac arrest, the mean time to defibrillation was 67 seconds for trained emergency service technicians while only 90 seconds for untrained sixth-grade students, indicating that even the untrained can use these devices successfully. However, the American Heart Association and the Office of Risk Management recommend training for anyone who works in a facility that has AEDs available for lay rescuers. Trained rescuers will be able to respond more quickly, reducing valuable response time, and will be better able to manage emergency situations. Because AED and CPR go hand in hand, it is best if personnel in your school or parish are trained in both CPR and AED use.

Schools may want to consider establishing a CPR/AED program for teachers and students alike. The American Heart Association provides a variety of options for schools who want to train their students, teachers and staff in CPR, AED use and first aid.

It is important for the local EMS system to know where AEDs are located in the community. In the event of a sudden cardiac arrest emergency, the 911 dispatcher will know if an AED is on the premises.

Placement of AEDs is critical; the location of the AED will determine the speed at which the device will be delivered to the victim’s side in the event of a collapse. It is best to place the AED in areas where large numbers of people assemble, such as the school gym or cafeteria. The AED should be placed in a visible location so that rescuers will always be able to locate the closest device. When possible, an AED should be located near a phone so that the EMS system can be activated simultaneously with the retrieval of the AED.

Since the athletic field is often a distance from the school building, it is good practice to transport an AED to sporting events. Consider including a portable AED as part of the athletic team equipment that your athletic director or coach carries to the field on practice and game days. Make sure everyone –faculty, staff and students –knows the locations of AEDs in your school.

General Procedures for AED Use

Check the victim for life-threatening conditions, including:

While each location will have its own documented protocol in accordance with their resources, training and staffing, the following steps should be considered:

If you have further questions about AEDs, please contact David Huskins at the Office of Risk Management at telephone 617-746-5742; email David Huskins.

The Office of Risk Management has contracted with Life Support Systems to provide AEDs to our locations at a substantial discount. To purchase an AED, to inquire about a maintenance agreement, or to schedule AED training, please contact Bret Smith at Life Support Systems, telephone 781-320-0030.